The Next Generation Is Upon Us

What will the PS5, set to be released in just two short weeks, mean for the next generation of games and gamers? What sorts of problems can they solve?  These are questions that are especially pertinent for sports sims, which typically utilize every last ounce of power a console has to offer.  Of course, all games stand to benefit from the hardware improvements of next generation consoles. However, we are here to focus on the sports titles. First and foremost, realism and enhanced visuals and balance are always appreciated in sports games. The PS5 will offer 8K support and while TVs typically aren’t built for that, yet; this means 4K support will be the standard, if not, common. It’s easy to see this will have heavy impact on TV presentation games like MLB The Show,  Madden NFL or The UFC series. The console’s support for ray tracing also means there will be leaps in improvements in terms of immersion. If you don’t know, ray tracing is a technique that mimics the travel of light to simulate complex interactions in 3D spaces. This technique is a staple in Hollywood visual effects. Unfortunately, due to the computation power needed to perform the task, no console has been able to support it, until now. Ray tracing for games can and will go beyond visuals. It can be used in ways to improve the overall immersion of games, especially in terms of audio. The end result becomes life like environments with enhanced audio that will make worlds come alive. Remember the affects of crowd composure in later NCAA Football games? Imagine that coming through your speakers or headset as if you were there. Players can actively begin to experience the difference between a Super Bowl crowd or a preseason game. For combat sports, “a big fight feel” won’t just be said to them on the screen, but they will truly be able to feel it. New consoles could also mean big things for artificial intelligence. Case in point: Madden NFL’s offensive line play, a major sore point for the series, could now arguably be a strength. With the help of more powerful CPUs, players should be more adept at working together to block rushers, and more importantly, getting to the second level and springing runners.

Sharing has definitely become a big part of the sports game experience over the course of the generation. Madden lets you share playbooks and custom draft classes. NBA 2K lets you download logos to customize expansion teams.  MLB The Show has these logo options as well as a robust vault of player CAPs (create a players) with a dedicated community of users who create amazing work. Oddly, sports sims are still somewhat behind on the sharing front. Consider the difference between, say, Madden or The Show, and a game like Forza Horizon, which is built on everything from custom race rules to unique paint jobs. The PGA 2K release of late allows for users to create and upload courses that are completely customizable down to the tiniest detail. A user could create any course, including local public municipal courses. This is one area where I think the next gen will be allowed to explode. I love customization. I think we’ll see a lot more community around those creations. We’ll see a lot more sharing of those creations. And we’ll also see creations not just visually, but modes. Experiences. Different rulesets. Rosters. Stadiums! 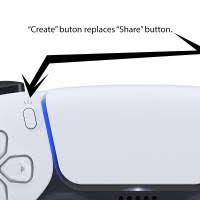 The Future is Streaming

Adding things like the “Share” button on the PS4 was a huge step forward for console gaming, allowing players to directly share their gaming experiences with whatever audience they choose to share with. Now with PS5, it’s time to improve streaming and sharing capabilities. The PS5’s “Create” button reflects a renewed interest from Sony to improve and refine the live streaming experience from console gaming.  Redefining the former Share button to something more encompassing of content creation has to indicate a greater purpose for the existing feature. That being said, there are plenty of ways as to how PS5 can improve content creation and live streaming on Sony’s console. Some of the best and most popular streamers in the world have an image fans and viewers can associate them with. Being able to craft this identity is what makes streaming so unique and creative for all creators, not limiting or constraining content to specific layouts or restrictions. This is why PS5 needs to offer more flexibility and opportunity to customize and tailor streaming via PlayStation to a greater capacity. Streaming on PS4 only had one basic layout for all PS4 streams/streamers to use, not allowing any form of customization or expression. There should be native tools on the PS5 for streamers to customize and create stream layouts that are unique and stylized. Whether this is through pre-made artistic assets that PlayStation provides, or even goes as far as allowing players to upload their own art altogether, stream layouts and art are a fundamental portion of a streamer’s identity. Every streamer using the same layout creates no reason to separate one from the other on visuals alone, regardless of difference in each content creator’s personality. This is still a relatively new suite of features even for Twitch itself, but PlayStation should also put time into developing new ways for streamers and viewers to interact. Rather than just participating in chat, award viewers for their time with something like Twitch’s channel points or some PlayStation version of it. Sony should partner with Twitch or YouTube to develop a rewards system for viewing PlayStation-curated and/or PlayStation-created streams. Integrate things like Twitch’s Hype Trains or craft some PlayStation amalgamation that also encourages more people to subscribe and gift subs. Anything to encourage viewership automatically makes streaming on PS5 a much more viable option. Any content creator who streams directly from PS4 only has the option to check chat and speak through a headset microphone. Players have little control on how they can interact with their viewers. Another cornerstone of a successful live streamer is being able to interact with viewers, which is incredibly limited on PS4. There are plenty other miniscule changes that can be made too, but these are the most impactful improvements that PS5 can make to improve console live streaming. Sony using the “Create” nomenclature for what the Share button used to be seems to mean an emphasis on content creation and live streaming.

So all of this sounds great and futuristic and all that, but what about the hard core sim gamer?  What about the silent group of franchise enthusiasts who are seemingly being more and more marginalized in recent iterations of titles. A clear trend has been established to essentially recycle franchise modes and put creativity and budget dollars into ultimate team modes and online competition. Let’s use some of the planned improvements to FIFA’s career mode with the FIFA 21 release planned on PS5 as a case study. The latest iteration of the FIFA game is set to improve the popular Career Mode massively, with more in-depth matches, transfers and training – alongside more active training and match sharpness, more options for weekly schedule planning and enhanced opposition AI. Career Mode will also allow gamers to have more control of each match’s outcome using the Interactive Match Sim that has been designed to improve Player Development, all alongside a brand new growth system. Improvements to player development lets users have greater control over their team’s individual growth, developing defenders into midfielders and more to fill more roles within the squad. The new player feedback system sees gamers have more a visual understanding of their players’ physiological and psychological states in the lead-up to a game, with access to morale, sharpness and how fit and ready for action certain members are. One the biggest pet peeves for players is the apparently preponderance of unrealistic transfers, which see transfers of big players between bitter rivals, which, while it does happen, doesn’t happen that often – which will see FIFA 21 roll out new transfer options that will offer human and AI-controlled teams with new ways to sign players. Gamers will be able to make loan to buy offers optional, as well as future transfer fees to be mandatory and AI-initiated swap proposals between managers. Issues with the youth academy part of the mode have also been noted, with the more meticulous types preferring a more hands-on interface and greater options in the development of players. So if we can transfer these enhanced options out to games like NBA 2K, EA NHL, MLB The Show, Madden, and others, sim sports gamers may just be rewarded. What remains to be seen is the follow through and implementation. We’ve heard promises from game developers before about planned enhancements to franchise mode only to see the actual implementation fall flat. Will time and effort (and budget dollars) be committed to these modes or will the train keep accelerating when it comes to ultimate team modes and online play?

The excitement within the sports game community is palpable as fans dream of the enhancements that will make their favorite sims that much more realistic. But there is a potential downside: A rough transition can set a series back years. Madden 06 is an infamous example. NHL is only just now recovering from its disastrous move to the PS4/XBox One. The next generation will also force sports sims developers to answer certain questions about the genre’s long-term future. Can the annual sports sim model last much longer? If not, how will sports sims be distributed? Through subscriptions? Is it possible that modes in games like Madden or MLB The Show could be broken up and sold separately in the future. Is that the future? Whatever happens, the next generation will represent an inflection point for sports sims. Games like NBA 2K will be more realistic, but the way we consume them may also be totally different. And how it all ends up shaking out will say a lot about not just sports sims, but the future of gaming as a whole.   @rdeschain19  on Twitter