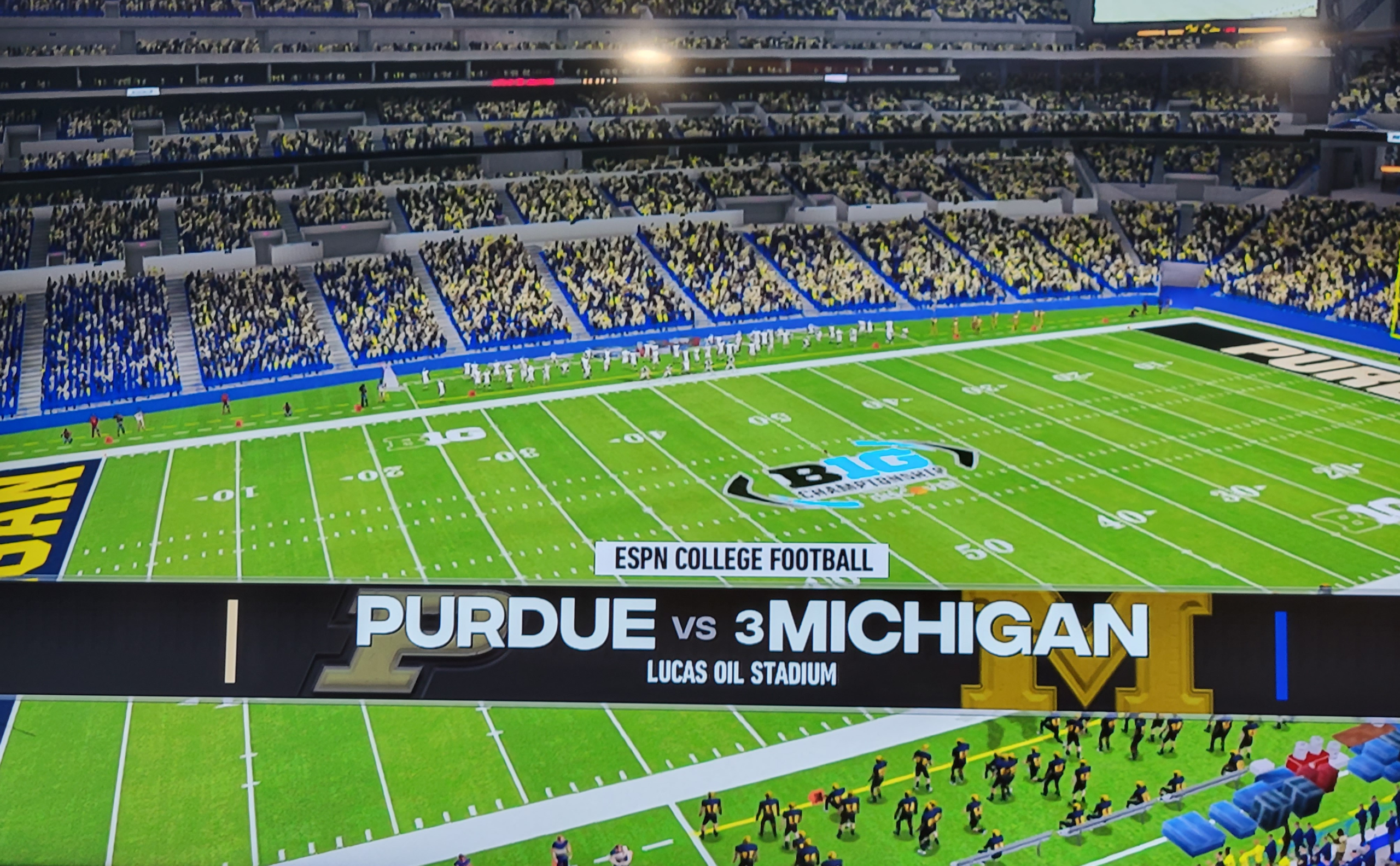 This is an attempt to consolidate a lot of the most popular mods and tools from the Revamped community for Dynasty mode in NCAA 14. I will do my best to keep these links and files updated, but it never hurts to do a quick search on the Revamped Discord to ensure you’re using the latest/greatest versions.

I’ve been playing NCAA 14 and tinkering with the Revamped mods/tools a lot lately, and I wanted to up the challenge and realism when it comes to gameplay, recruiting, and visuals. Below are some suggestions that have made my dynasty very beautifiul, realistic, and challenging.

Before we get into the House Rules section, here is a consolidated table of the various tools I’m using, including links to download files and instructions, where necessary.

*****Important: It is best to follow the included README files and then reach out to the Revamped community or to the creator of each tool if you need further support.*****

Choose Your Team Realistically
There are a number of ways to do this, but I recommend choosing a school who hired a new coach in real life that year who had no previous college head coaching experience. If you’re starting late in the real-life season, you might also opt to take a team that fired their coach earlier in the season.

Another twist, I will not take a HC job filled by someone who was a real-life coordinator the year before as it seems weird to have that real-life person just disappear. Instead, I look for a guy with a 0-0 career record, and I use Wikipedia to search for these coaches to see whether they came from another program or not as a coordinator. You’ll end up finding a team who hired someone from the NFL, Division II, or someone who was previously a position coach.

That is where I get my pool of eligible teams who’d hired a bum like me. This is a more realistic experience than just picking a 1-star school, and it even gives you some options to get into a slightly better conference to start with.

0-25% Scouting Maximum
I used to use 0% scouting, but taking a page out of Fang’s house rules, I’ve allowed myself to scout up to 25%. Be careful to not give yourself a recruiting upgrade that would bump this percentage any higher. If you do opt to go with 0%, you can upgrade your coach to reveal 100%, but I would then suggest to wait until the player commits before spending any points.

Start with Coaching Tree at 0, and Never Reset Them
You’ll have plenty of time to build up your coach’s coaching tree, so feel the struggle of a first-year coach by starting with a bare cupboard when it comes to coaching tricks up your sleeve. By the end of the first season, you’ll likely have around 6 upgrades to work with. At the start of each season, do not reset them.

Play Using cgator22’s Sliders from Revamped Community
cgator22’s sliders are unlike anything you’ve experience in NCAA 14 before as they tune the gameplay under the hood beyond what the sliders screen offers. You’ll feel the difference right away, and the challenge feels very authentic. You can find instructions and more to cgator22’s sliders in the table at the top of this page.

If using cgator22’s sliders proves too challenging for you (either in gameplay and/or in technical know-how), I would suggest using J-Kitt’s sliders from Operation Sports.

Use Suggested Plays Only
Unless you want to overrule a 4th down decision, only call plays from the 3 “Ask Coach” plays which essentially come from your coordinator. Do this for both offense and defense.

Some of you may wish to take this a step further and use the “sim play” option for things like punts, FGs, and even kickoffs (onside kicks) for both you and your opponent. There is some added realism here as you might actually see some blocked kicks or onside kicks that actually get recovered!

Be careful though as the AI in these instances might not always do what you would want to do on a 4th and short, for example. You might end up simming a punt instead of a FG from your opponent’s 35 yard line on 4th and 2!

Control 1 Player on Defense Only
Simply put, do not switch on defense to get yourself into a better position. Choose your player on defense, and stick with them for the entire play.

You can do the same on offense by never switching to make a catch, for example.

Limit/Eliminate Money Plays
I do not run a QB sneak or FB dive more than once a game. Safe to say, you can basically eliminate QB option reads from your repertoire entirely as well. Do not use 4-verts very much, if at all (once a game?). Limit yourself on audibles and hot routes, especially.

I try and not use a play more than 2 times in a game, ever. This is a challenge, especially when you’re in a tough bind and need something to get you out of it, but it’s extremely rewarding when you are able to convert a tough 3rd-and-3 using  a play from your playbook that you haven’t used very often.

Playing in a realistic way that does not take advantage of the places where the game can be exploited makes the losses feel more organic, while making the wins feel far more rewarding and earned.

Never Reset Your Game
Live with the highs and lows of college football; it’s not always going to be perfect. I recently lost a 3-point game to LSU at home after my QB threw 3 INTs, including one on what could have been the game-winning drive while still tied 17-17. LSU kicked a FG with 3 seconds left.

Recruit Top 10 Interest Only
Only add players who, via the search tool, have you as a top-10 choice. No exceptions. This alone makes the challenge very realistic while also keeping it easy to manage.

Even at a time when I needed a kicker with Temple, I stuck to the plan and eventually had a few guys show interest. None of them were very good, but that’s to be expected with a 2-star program. Had I gone carte blanche with recruiting, I could have easily talked one of the top kickers in the nation into coming to Temple.

Later, in my first season with Kentucky, I only had 3-star guys showing any interest as we were a 1-star school. Those guys had interest mostly because we were in the SEC and because I had a coach prestige of A-.

Do Not Add Players to your Board All Season Long

I wont’ set exact guidelines around this as circumstances often dictate how I handle this, but let’s just say that I do not go fishing every week to see if any new guys are suddenly interested in my team.

If a recruit signs elsewhere and I have no other backup plan at a position of need, I will go and take a look around. I might do the same around midseason. In the end, I’m trying to simulate the experience of keeping in constant communication with these recruits in the hopes that they choose my program.

No Offers Unless AI has Offered
It’s common knowledge that there are good players who will go unsigned all season long. Let it happen. I consider those players to be academically ineligible, but it does the realism of your dynasty no good to be the only team signing these players year-after-year. Some of them will eventually get offers from schools, and at that point, offer away, but not until then.

Don’t Over-Saturate a Position
I generally try to sign no more than 1 player per position group each season. There are exceptions, such as if you only have 2 Gs returning, for example. However, if you have 7 WRs returning for next year, do not pursue a WR recruit.

I sometimes will make an exception if the player is too good too pass up, or if a player has me as their #1 choice from the start of the recruiting season, but those situations should be rare.

Besides, if you keep bringing in a bunch of recruits who are barely cracking 65 overall, you’re just log-jamming the interest future recruits will have in signing with you in an upcoming year. And if you over-recruit a bunch of 4 and 5-star guys, Fang’s Transfer tool (check the table at the top of this page) will make you pay as you’ll see these players leave your program more often than not.

Beyond that though, letting the AI handle the scheduling of games makes for a nice surprise each pre-season as you see what sort of schedule–good or bad–you’re up against for the upcoming season.

Use the Dynasty Editor Tools
We’ve covered a lot of these already, but if you’re comfortable doing so, get involved in the Reamped modding community. The learning curve can be a bit steep at first, but like anything else, it gets easier with time and experience.

Besides all of what has already been discussed in this post, you can enhance your dynasty with:

The Revamped community has done an amazing job of breathing new life into NCAA 14. There is a learning curve when using these tools and mods, but set some time aside when starting your next dynasty, and it will be well worth it. Be sure and keep a handful of backup files too!

Use the table at the top of this post to get started!