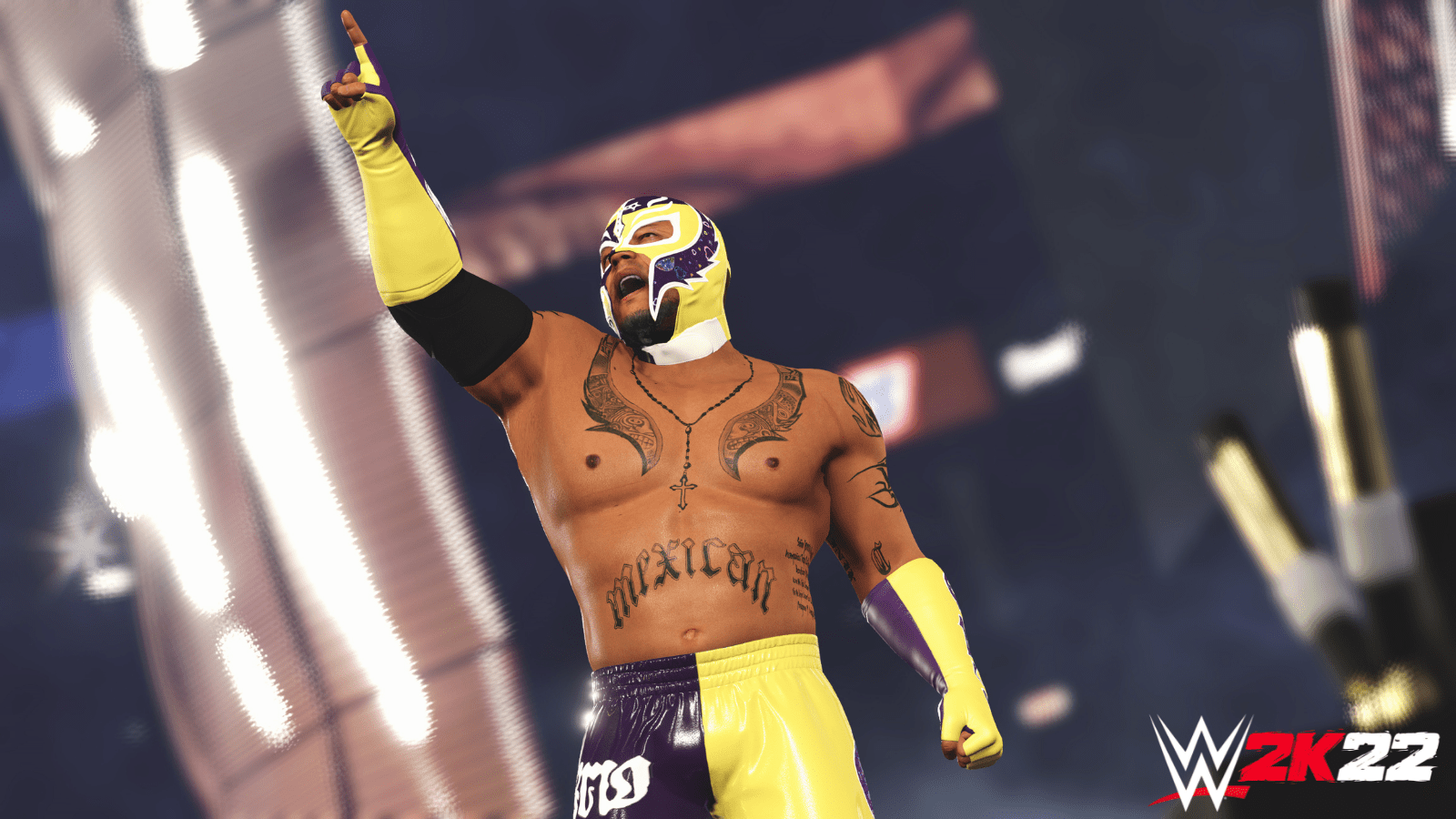 When I was a kid I loved wrestling. I don’t think I ever watched that much of it, relative to the brain time I gave it. But, I played wrestling video games All. The. Time. To this day, when I’ve been playing games for too long and need to go outside for some fresh air, that’s a feeling I associate with WWE Smackdown vs. Raw. As I got older, I played off and on until WWE 2K16. There just wasn’t enough to make me want to keep going with these games.  When I heard they were taking a year off to make a better, next-gen, wrestling game, I was excited. Now that I have it in my hands, I feel like a kid again.

Career mode is my favorite part of sports games. I hate the trend of playing out someone else’s story. In MyRISE, you’re often given choices, and those choices actually change things. You create your character and decide whether to be a good or bad guy. Then, the storylines come in. At any time, there are multiple people you can talk to who will offer setups that send you in different directions. You move up through the ranks and eventually earn a title shot at Wrestlemania. Even then, there are more choices for you to make. It really feels like you’re the one shaping how the story will go. It’s a perfect fit because professional wrestling is told through storylines. I will happily start over when I feel my character has run his course. They even have a full-fledged women’s mode, which most sports games can’t say.

This is the GM experience I expected. You can change everything about the rosters, schedule shows, and even create your own brands. Down to the odds a certain type of match is scheduled each night. If you’re looking for this type of control, you already own this game. There’s also a mode where you control a superstar and just play through their matches, this is more like a traditional career mode where you just play your character’s games. I didn’t spend too much time in this mode because it’s not what I’m looking for in a GM mode.

In a GM mode I want tangible goals, I want the choices I make to help build something. That’s exactly what MyGM gives you. You pick a GM and a brand to run, then you pick a GM and a brand to compete against. You draft a roster of superstars and compete to see who can bring in the most fans. You’re given a budget and the freedom to run the show as you see fit.  Each week you put on a show, and there’s a constant balance between wanting to earn fans (who earn you money) and wanting to save your money for the pay-per-views. All the while you’re seeing how the other brand is doing.

Here you play through some of the biggest moments in Rey Mysterio’s career, twelve matches spanning four decades. Each match has objectives, finish them all and you’ll unlock the final match. This mode is cool because there are lots of videos where he explains his life and career. Some of the objectives trigger a switch to video from real-life matches. The switches never feel jarring, and it’s fun to hear Rey talk about some of the biggest moments from his career.

This is the mode I was least excited for. It’s the answer to Ultimate Team/ whatever variant other games have. It’s a quick (ish) way to jump into some matches and try out different characters. You put together a team of wrestlers, come up with your own branding, and then head off to complete missions.

They revamped the controls for this game. I can’t remember what they were before, but I’ll say this. When I want to do something, my fingers are in place to do it. It just feels right. The graphics in this game are wonderful. The commentary is slightly better than I hoped. It’s certainly no worse than any other sports game I’ve played recently. The music feels exactly like the music felt back when I was ten years old. This may seem like an insult, but it’s definitely not.

Customization is king in this game. As soon as I jumped into the game I made a custom character. I didn’t do it through MyRISE and, for some reason, it’s not transferable. So I had to start from scratch and do exactly what I had already done. You don’t always know the scope of the storyline you’re jumping into. Some are as simple as “imagining” fighting someone, while some are five or more matches. The biggest detraction is, it’s possible to over-level your character. Especially if you start with the mega-boost pack. You can jump straight from the beginning of training to competing for championships. I wanted to rush through to see how things progressed. When I go back through, I’m going to want to take it slow to really make it feel like I’m earning everything.

My “complaint” here is the same as what works for it. This mode is niche, niche, niche. Nothing stood out to me as something that could be fixed, it just is what it is.

My problem with this mode is that it ends. Seriously, you spend hours building your roster, finding and developing talent, and once the schedule is over, it’s done. Just delete the save and start over. You can set the time period to fifty weeks, but it probably makes saying goodbye even harder. If you sign a nobody for $1,000 and build them into a title contender, it’s a bummer to just have that end. It would be nice to be able to take your roster and move on to competing against the other brands. That alone would triple the amount of time and could add more of a difficulty curve.

If you want to unlock everything, you need to complete all of the objectives. The objectives are so specific that it can be difficult to set them up correctly. There’s a need for the triggers to lineup with the videos, it just seems there could be a more general way to do it. Rey Mysterio’s had a long career, but three of the twelve matches take place during his late-2010s return to WWE. It was much cooler to see him talk about matches that happened years ago. So, what is this mode for? If it’s about telling the story of Rey Mysterio and his matches, they should lean into it more. Why is there even an option to win or lose before you’ve played through the whole thing?

I like Ultimate Team modes enough to play them a little because they’re fun arcade feeling games where you can assemble crazy teams. I just don’t see the appeal in a wrestling game. The “team” doesn’t really come into it (at least not yet), and everything I’ve seen is just normal matches. Nothing you couldn’t do in play now.

The camera angle isn’t adjustable. It can make it hard to see, when you’re fighting backstage there are times parts of the screen are cut off by something in the foreground. It’s clear that the beautiful graphics take a toll on the console. I played a Royal Rumble where there were six or seven wrestlers in the ring, and things got super weird. One wrestler got stuck in an animation, just spinning around. I would expect more polish after they took extra time to make this game. Most annoyingly, the game is inconsistent with timing/ spacing. Sometimes an opponent will attempt a move when you’re out of range and you’ll teleport into their hands. Sometimes you’ll try a move but it turns out you’re half a step too far away. Smoothing this over would go a long way to boost realism and ease frustrations.

There’s clearly room to improve here, but I’m excited to get back to this game as soon as I’m done writing this. My big worries are about MyFACTION, if it doesn’t make money, will they continue to develop this game? If not, it would be a shame because MyGM is as much fun as I’ve had in a AAA sports game in a long time, and MyRISE is a career mode done right. There’s also promise in Showcase. If you’re interested in this game, I would say it’s definitely worth checking out. Which version you want to buy is up to you. The higher-priced versions include more DLC, which is mostly more characters and arenas. I’m not sure they’re worth it if you aren’t a huge NWO fan.